A Holiday in the Berg at Three Tree Hill

The mountains were calling. With a public holiday on our side, we finally listened and escaped to the Drakensberg for a long weekend in the hills. From our base at Three Tree Hill Lodge, my boyfriend and I braved the chain-ladder hike to the top of the Amphitheater, tracked a number of rhino on a game walk, and cycled to a nearby village with the cows as our bystanders. 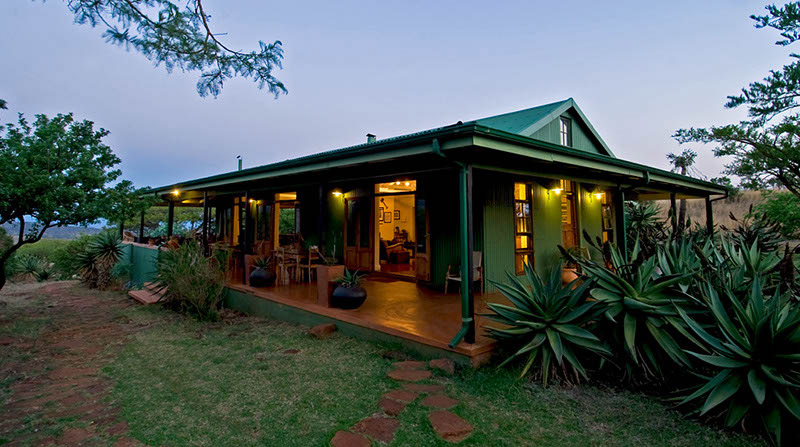 You could say we headed for the mountains with vigour because all of the activities we loaded onto our 3 day itinerary. But in all honesty, when you’re surrounded by such natural beauty and treated to lodge luxury and warm hospitality, it seemed almost effortless. 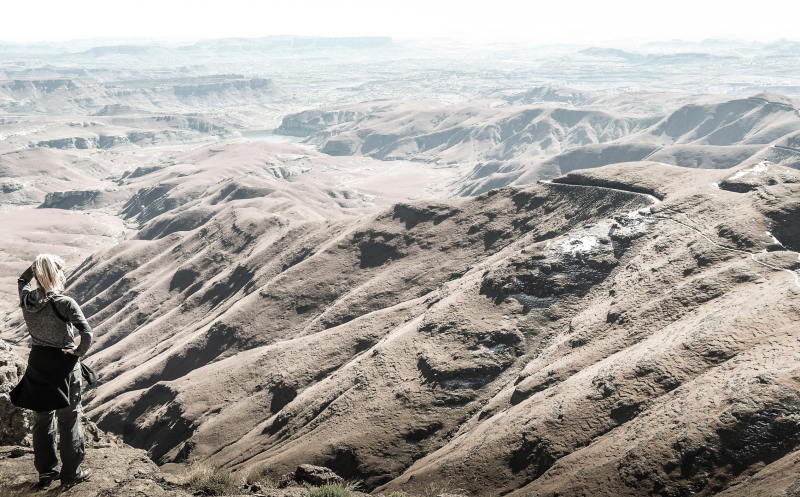 Before our arrival at Three Trees, we conquered the Amphitheater climb which begins at the Sentinal Car Park. There was a decent amount of snowfall leading up to our weekend hike, which made for some slippery zigzag paths along the route. With our hoods covering everything but our eyes and gloves strapped on tight, we hovered very low to the ground as we crossed the icy patches. We called ourselves the Drakensberg mountain burglars. 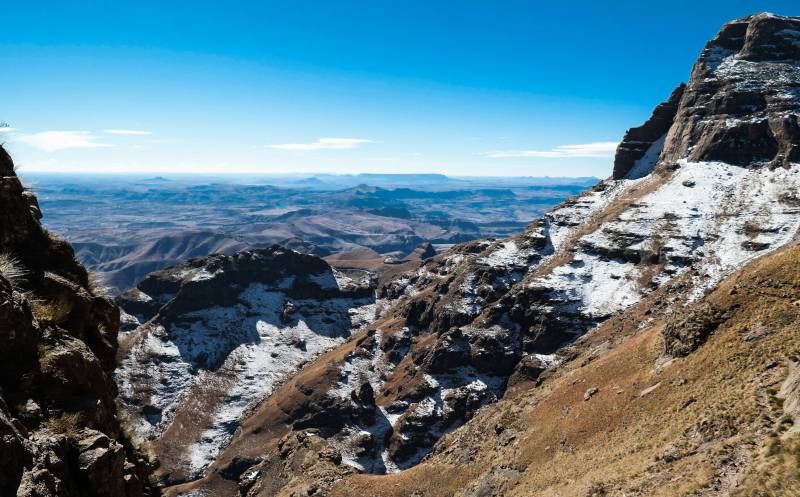 The scene was set and staying in character form, we stealthily climbed the intimidating ladders and made it to the top of the amphitheatre.

We were high on accomplishment and literally high up at our 948 meter stance above the rest of the world. We threw some snowballs in celebration and continued our way through the snow to the Tugela Waterfall. 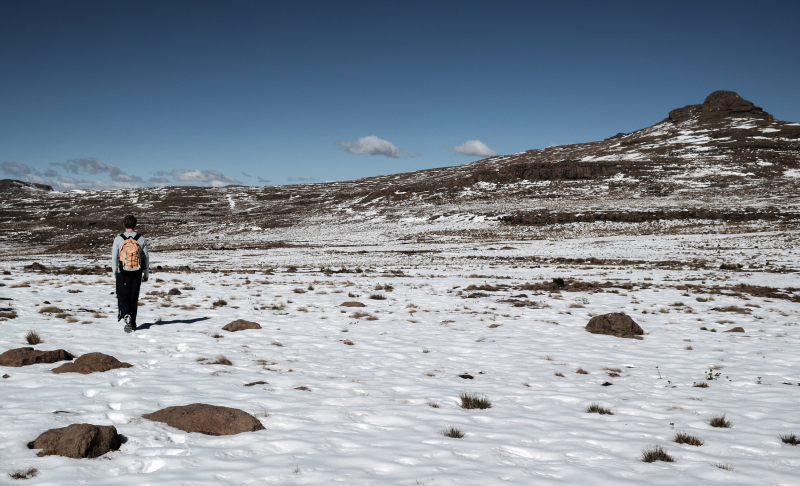 With sore feet as a gentle reminder of our amazing day hike, we excitedly arrived at Three Tree Hill. The owner-managed, eco-lodge boasts stunning views of the rolling Drakensberg foothills and the Spioenkop Game Reserve, and the viewing deck from our room was a testament to this. 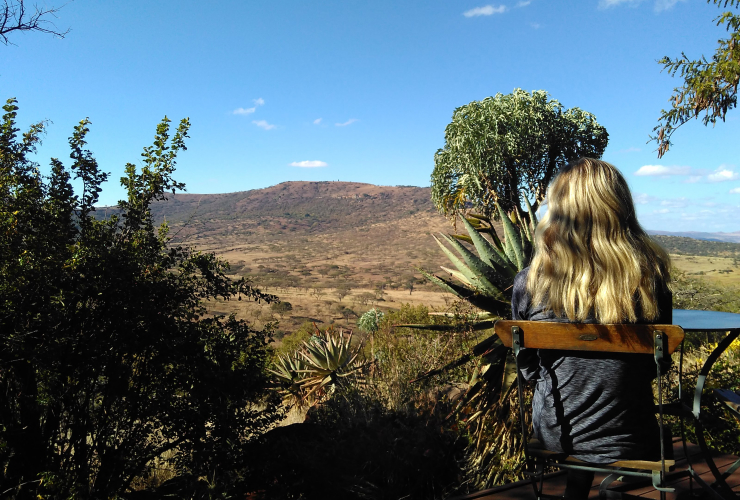 Guests are encouraged to do as little or as much activity as they’d like during their stay. A chalkboard set against the verandah of the main lodge lists the activities organised over the next few days. Usually a morning and afternoon activity are part of the agenda, where you can get your hands dirty horseback riding, mountain biking, and tracking rhino on a game walk.

A swimming pool, viewing deck, and four road-mapped walking trails dot the property and can all be enjoyed at leisure throughout the day. We did two of the four; one which lined the fence of the game reserve and the other that led to the Spioenkop Dam. 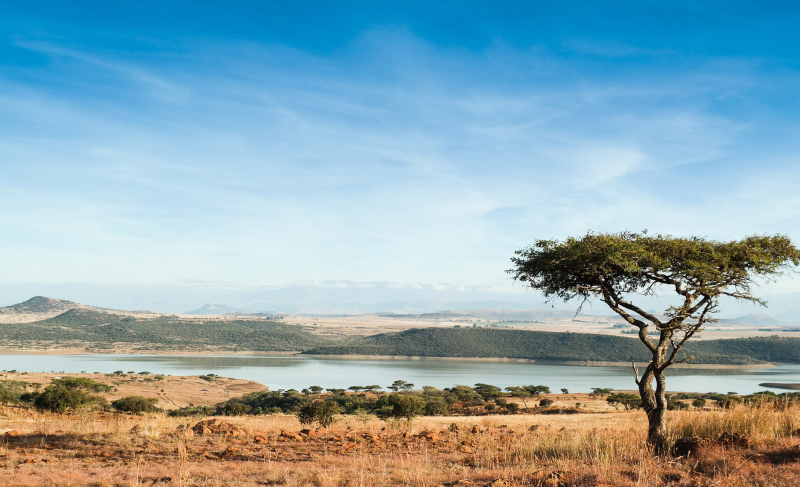 The trails provided two contrasting views of the surrounding mountain scenery, although the carefree cows remained a common thread to both. 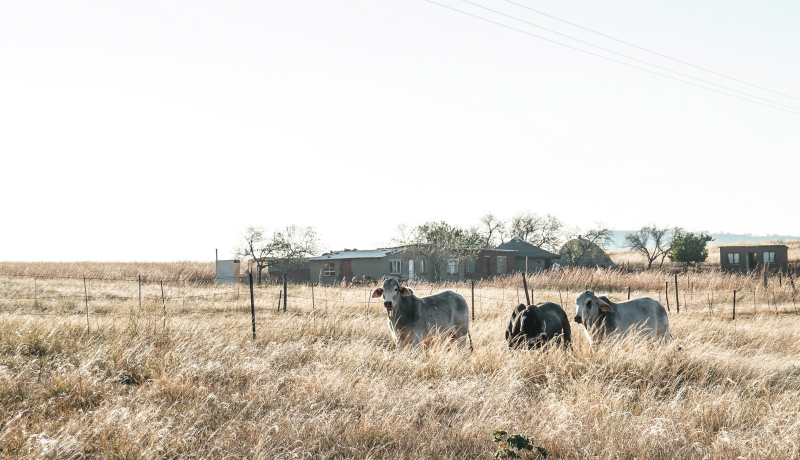 The highlight of our stay was the game walk with rhino tracking led by Cheryl, one of the lodge owners. She knew the Spioenkop Game Reserve like it was part of the lodge’s furniture. 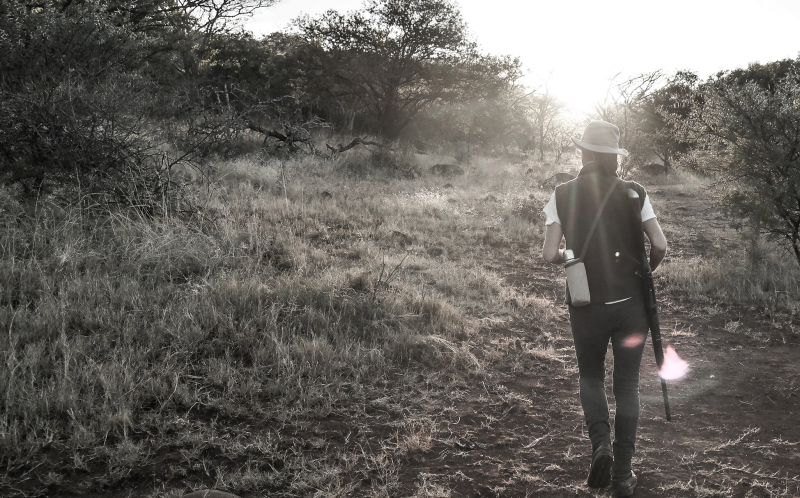 With binoculars in hand, all nine of us single file followed her every footstep. Within ten minutes into our walk, we spotted a group of four rhino. Having a returning visitor by our side that had a serious knack for tracking them, we quickly spotted another two groups of rhino, with a calf who looked to be only a few weeks old. 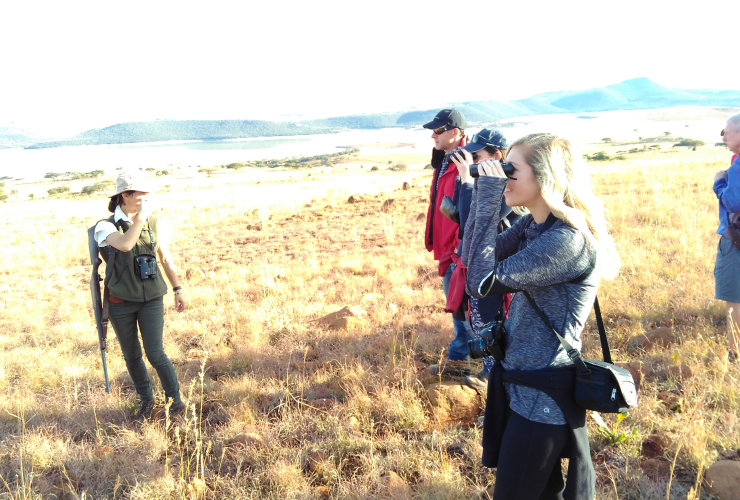 Eyes glued to our binos, we kept chatting back and forth as to which group of the reserve’s rhino to follow. One guest during our walk put the whole scene into perspective by saying, “How incredibly lucky are we to be bantering back and forth as to which group of rhino to look at?” She couldn’t have been more right. Although we were awe struck by the sheer number of rhinos witnessed, we also saw giraffe, impala, waterbuck, reedbuck, and a couple of tail-bouncing warthogs.

The calls of the jackals were nature’s cue for us to head back to the lodge for sundowners overlooking the dam. We watched the sun sink into the clouds as the sky filled with technicolour dreams and happy memories of our mountain holiday in the berg at Three Tree Hill.

You know that saying, “good things happen to ...